The Solar Eclipse of 2017 has crossed our farm and moved on its' way. It was a beautiful sight even though we were not in the path of totality. For about 1 hour and 20 minutes, we were able to view the moon gracefully and beautifully crossing over the sun slowly making the sun disappear. We were only about 90% covered, but you could feel the change in the air and there was a calm that I do not think I have ever experienced.

The 2 minutes or so of darkness was not a complete dark, but was more light a late twilight. I attempted to watch what the animals had done while it was occurring and did not notice many changes other than it was still. Not a rooster made a sound ( and they are usually really noisy) and the rabbits were lying still in their cages. It was as though they were well aware that there was a change in the air.

While it was partly cloudy, we were still able to enjoy a large amount of the historic and enlightening event. The air cooled and I noticed that the humidity that we were feeling just a few minutes before suddenly seemed to be gone. The color of our surroundings seemed to change. The grass even seemed to be a different shade of green that seemed as though it was mixed with a grey hue.

If I ever have the opportunity to take it another solar eclipse, I pray that I am able to take a trip to a city that is within a path of totality as I am sure that it was breathtaking and very calming to some. My daughter commented during the brief time that the moon completely covered the sun that she felt a calm that she had not felt before and I had a certain calm feeling as well.

Now it is raining and cloudy here, but when I stepped out just a few minutes ago, I was still in awe as to how things seem to be more still. In a world where everyone seems to be looking down at their phones, I Pads, etc. it is amazing to think of how many were looking up today and the peaceful areas where many were gathered and all remained calm. Peace at it's finest! 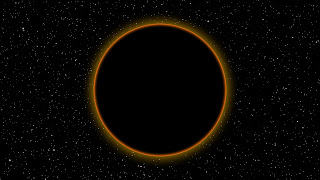