This is a family blog and I write often about our farm, but today as I write it is with a heavy heart. I am sure that many of you know who the reality television family, The Duggars are. They are with the show, " 19 Kids and Counting". Many times this family is looked down upon for having so many children, even though it is no one's business as they take care of themselves. They are a Christian family that stands firm on the values that they feel are important in their lives, which is something that we all could do more of.

Yesterday, news broke that the oldest son, Joshua, was reportedly to have fondled some of his younger siblings and a family friend during his teen years. Whether this report is true or not, Joshua has issued a statement saying that he did some things during this teen years that he has asked forgiveness for and that he has disclosed these mistakes to his family and his wife, Anna. His parents, Jim Bob and Michelle Duggar have also made statements saying that they went through some dark times when he was around 14 years old and that they grew closer as a family and have a closer relationship with God after going through those dark times.

Many young men make mistakes as teens that we do not condemn them for as adults. Many young men and women are known to "play doctor" as they are experiencing adolescent issues and experiencing rapidly changing hormones. It does not make them a bad person, but they must learn right from wrong. I am not saying that any of these actions are right, but I also know that it happens in many families.

I am sure that many people are going to say that when the family became aware of this, they should have gone to the authorities and had this child removed from the home. People will say that they were not protecting their other children and that Joshua is a predator. People will say that they could not watch each child due to the number of  them. I do not agree with any of these sayings.
The actions that are being reported were under no circumstance right or moral, but they were actions that occur in many other households and no one ever hears of it. The parents say that he was sent to stay with a friend and was talked to about the situation. As parents, I am sure that prayer was a huge part of the process and God can heal things that others can't . Joshua was a teen boy that was maturing and having urges that every other teen boy has.  His actions were unspeakable, but not unforgivable. His actions hurt others, but was handled in an appropriate way. His actions are also not something that should define the rest of his life. If he had been older, then I would feel a little different.

He has admitted to his mistakes and has taken actions to correct them. He is currently a young married man with a family and this dirt does not have to break him. He has standards that he is raising his family by and as long as he has no longer acted in the same way there is no reason for all of this to come into any current light.

We must remember that we all make mistakes and that we all must live with something that we have done that we are not proud of . Completely ruining his life and that of his siblings and parents is not appropriate behavior either. How we deal with this news is something that each of us will have to process and decide within ourselves, but I will keep the family in my prayers as they are going to face many questions and much media backlash.
at May 22, 2015 No comments: 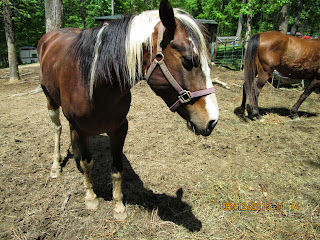 Jigsaw is one of my daughters' new horses that she will use for fair. He has been a member of our family for a few months now and he is certainly a dandy. He is a 9 year old gelding Paint horse that has done well for her so far. She has shown him once this year and we are looking forward to more shows soon.

She fell in love with him when she first seen him. I believe that his fancy mane is one of the great things about him. He is certainly flashy when he is cleaned and ready for show. I believe that with a little more work, he is going to be a fabulous show horse.

She will be using him for most of her 4H stuff this year as her Tennessee Walker, Abdul that has been her faithful companion the previous four years is beginning to show his age ( about 23-26 years ) and is beginning to lose sight in his left eye. I hate to see the day that he passes or that she must have him put down due to his health. He has been there, done that and has even ran barrels for her. He has truly been the perfect horse for her and has helped her build her confidence. 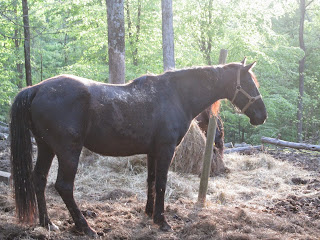 This photo is of Abdul.

She will tell her that Abdul is still her favorite, although she really likes Jigsaw. Abdul is totally her baby and does anything that she asks of him. He is a well loved favorite here on the farm.

She has another new horse this year and she calls him Bub but his registered name is going to be Shot Through the Heart. She thought of that name from the song, "Bad Medicine" by Bon Jovi. She is a huge fan of their music and hence the name sticks. Here is the photo of him as well. 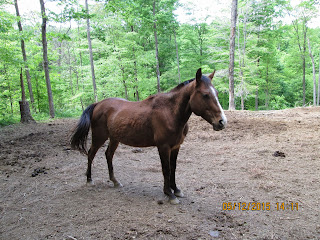 He is a good little horse too. He seems to have a nice little trot and walk and I am sure that she is going to be successful with him as well. It will be a learning experience for the horses and my daughter.
at May 15, 2015 No comments:

Yesterday was Mother's Day and the weather here was really nice. Other states could not say the same thing as weather woes were incredible in many states. Texas, Arkansas and other areas seen massive tornados. The Carolinas seen many effects of tropical storm Ana and the mountain areas of Colorado and Montana seen feet of snow.

Today brings a threat of tornados to Michigan, Ohio, and Indiana while flash floods are being a threat in Texas and Arkansas. Myrtle Beach and the coast of North Carolina are still going to see the remnants of the tropical storm. Areas in North Carolina and Virginia along the coast could still see some flash flooding today.

Whatever your weather is today, I pray that you are safe. Use common sense when you are in a weather situation. Do not drive through flood waters, do not try to stay above ground if you don't have too in a tornado. Pictures of these storms can be brought to us in the way of storm chasers, do not risk your life to get one. If you are in the areas that are getting snow, drive careful and know the areas that are not safe to drive in.