As many of us are well aware of, today is known as Black Friday and that is because of the sales that so many merchandisers and companies use to draw shoppers in today. Online sales are increasing and I believe that people are deciding to shop more online due to the craziness that happens at the sales in stores. It seems that the items they place on sale are limited supplies of most of them and people will fight over those items.

For me, Black Friday is a day that I am spending at home and setting up a vendor booth for a Breakfast with Santa tomorrow. I am excited over the event and hope for a good turn out. I am worried that the rain will cause many to stay home and I am worried that turn out may not be as good as hoped for. I am just looking to sell some merchandise and purchase some new. with the end of the year nearing, I know we will have a new catalog in January and I hope to buy some new stock then.

I hope that this finds you all safe and warm at home even if you have fought the crazy crowds earlier in the day.

Please feel free to check my website at pinkzebrahome.com/cslater and if you contact me directly with an order today at pzcarol1@yahoo.com I will be having a discount for you. I will have to place that order though so feel free to contact me.

Happy Thanksgiving to each of you! I am happy to say that I enjoyed a nice day with my family and we had a wonderful meal. I was thrilled to have all three kids home with us as well as my grandchild. I know that they are all close and we see them often, but I am also aware that as they age and we do as well, that could easily change.

I am thankful for a God that loves me and protects me. I have felt His hand in many things this week and I really needed that as the Devil was attempting to put doubt into my life with the horrible things that I have heard of this week. Illness, death, and just the meaness that seems to be happening in the world these days. I am thankful that I know that the days ahead are going to be rough as the Bible tells us of what to expect.

Paris, France is known for being a city that is beloved by many and know to bring romance and love to many. This weekend, Paris became the latest terrorist target and the people suffered a huge loss as terrorists attacked multiple sites throughout the city. With over 100 killed and many others injured, life changed for the people of Paris.

Being home to another terrorist attack several years ago, the people of the United States can understand the loss and yet, the fight that is within the people. It makes a nation stronger in my beliefs to know that people stand together and unite to keep life going and to keep a stronger hold on what is important to them. Family and loved ones are what is most important to all of us and when that is threatened, even if not directly, it makes a human being stand a stronger stance and fight for what is more important to them.

Yes, multiple lives were lost for a senseless cause, but the strength of unity that Paris will now see from their own and others around the world will be a surprise to many. Other countries will decide to stand for the people of Paris. Many of the loved ones of those lost will take a new stand to make their families stronger and many will turn to their religion to find the faith that they may have lost.

I decided to see exactly what terrorism meant in the Oxford dictionary and here is what it said:

the use of violence and intimidation in the pursuit of political aims.   I don't know that many of us truly understand what the political aim of ISIS is but I believe that we all understand the violence and intimidation that comes from them. That is why many countries are joining in the fight against them. Whether their political views are right or wrong is not what is important to most, it is the way they choose to use the violence to stand for them.
Our world needs peace and kindness. I am seeing multiple ads these days about being kind and I would like to start my own campaign to stand for kindness. I want to suggest that we all begin a new social media campaign to showcase kindness. Let's use YouTube, Facebook, Instagram, Twitter, etc. to show the kind things that we are doing! Let's start a new hashtag   #let'sbekind
Have a great day! Be kind and share it!
at November 16, 2015 No comments:

Rich shades of red, orange and burgundy seem to be the best of the scenery that we have. These photos were taken a couple of weeks ago, but they are still pleasant to see. I have wandered around the farm and taken many pictures recently and these are some of the best fall photos that I have on the camera. 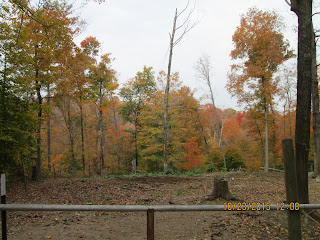 These are the beautiful colors you can see overlooking one of the horse pastures. As you can see, the colors are quite full on the trees! 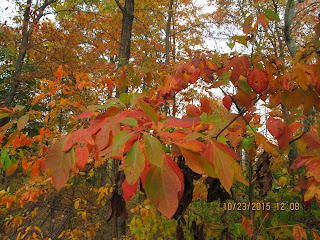 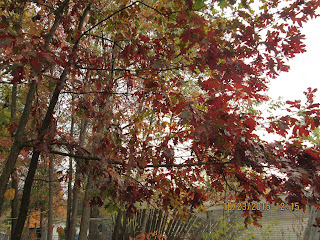 Here are some of the trees outside of my window that I have a great view of from where my desk sits. The colors are simply vibrant and beautiful! 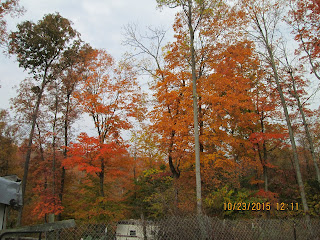 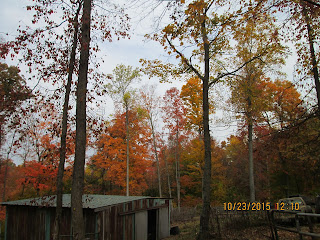 Here are a couple more taken near the horse pastures and some of the bright oranges that we see so much of in the fall of the year. Hope you enjoy these as much as I do!