Each day,  our country loses a soldier or former soldier to suicide.  Every day,  a family loses a loved one that has defended our great nation. These senseless deaths need to stop.
Every day, families struggle w with a son, father, uncle, brother, dad, or husband that can't or won't discuss what horrible things they have seen or done while serving for our freedom!
Their lives become such a struggle that they don't want to live.  How sad!  We need to become more aware of the tragedy that touches families on a daily basis and realize that war does touch those that remain home.
My friend has written a wonderful song that shares this tragedy with us.  I want each of my readers to listen to the song that speaks volumes.  Dear Uncle Sam by Jeanette Bolt Smith. Feel free to leave comments!

Indianapolis, Indiana is the place to be today! The lines are already forming all around town to get into the Indianapolis Motor Speedway. News crews are showing traffic jams everywhere around town and they have been telling locals that the lines will be long for this special race - 100 years!

Drivers and fans are all excited to be a part of such a wonderful event! The race always brings a lot of excitement and energy, but this 100th running is just a bigger and more exciting time. Many former winners have taken part in the festivities leading up to the race today. Johnny Rutherford, a three time winner, is driving the pace car today.  AJ Foyt, a four time winner and the man known as "King of the Indy 500" will have three drivers in the race today and will certainly be a huge part of the race today as well.

The race is a tradition for many people and recently, a man was found that has been to over 90 of the 100 races. Many fans are life long fans of the race. I have never been to the race, but I have been to the track for a Nascar race. It is a beautiful track and the fans are true fans. I have many memories of listening to the race on the radio as a kid and how things actually seemed to revolve around the race even if you were not there.

Normally, the race is not televised at the time of the running but this year the Speedway has actually lifted the ban and will allow it to be televised today. For many people this will be the first time that they have actually seen the race. It is usually televised in a delayed fashion late evening. I personally, am hoping to catch some of the actual live broadcast today.

Decorate in black and white today and celebrate 100 years of the Indianapolis 500! 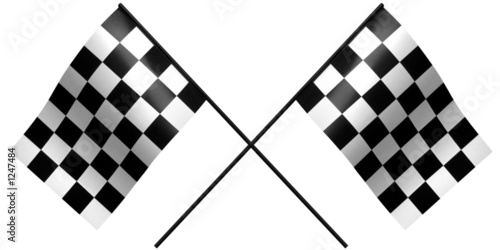 My, My, what a difference a year makes! A year ago today, I was at the hospital waiting for my youngest daughter to give birth. We had just found out a year ago yesterday that she was pregnant and I was literally in shock. I was scared of what issues the baby might have due to no prenatal care, taking birth control the entire time, and the fact that my daughter had been barrel racing her horse just the week before. At 11:49 a.m. a year ago today, my beautiful granddaughter arrived into the world and was absolutely perfect!

Today she is a beautiful, perfect baby that is beginning to walk and talk. She played in the yard yesterday and I was so amazed at how smart she seems to be. She loves to walk and she is such a happy baby and one that will give you a huge smile and has the cutest dimples. She has learned to wave bye bye and she tries to say it. She says hi and she says Papap for her Papaw. She says Momma. For some reason, she seems to call me YEYE. I prefer to be called Mamaw, but I don't think she likes that, so for now I am Yeye.

The next year will bring about many changes in her walking, talking, personality, and looks, but she will always be my perfect little angel. I never really wanted grandkids, but I would not trade her for a million dollars because she is the best!

Last Friday night, I took my daughter and granddaughter to the circus. We met up with my oldest daughter, her boyfriend, and his nephew. We went to the fairgrounds to see the Kelly Miller Circus. We had gone to see the same circus year and had a really enjoyable time, so thought that we would go again. What an amazing time a circus can be!

When we arrived, the previous show audience was leaving and there really were not many people walking around to join us for the later show, but I knew it would quickly fill up and I was right. We decided to get in line and two of us went to the box office to ask if we could upgrade our tickets to ringside and we were able too. If you sit ringside, you have chairs to sit in instead of the bleachers. Much better sitting, especially with little ones. 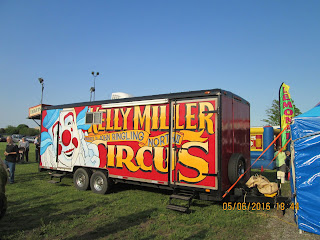 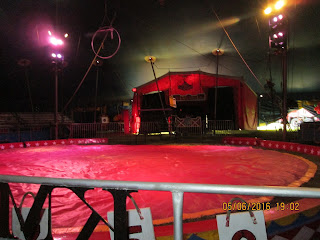 We anxiously awaited the start of the show as we sit in the front row. We were well aware though that the big cats were not in the show as last year, this ringside would be a cage in front of us. I was immediately disappointed as I was anxious to see how grandbaby would handle the roar of the tigers. After a half hour, the show finally began. 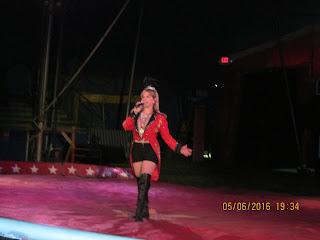 This was the ringmaster for the evening and very knowledgeable . 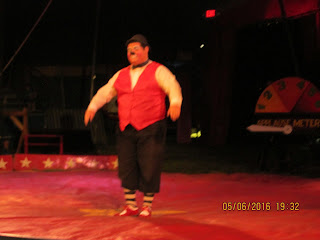 No circus would be complete without clowns and this one was certainly a good one. 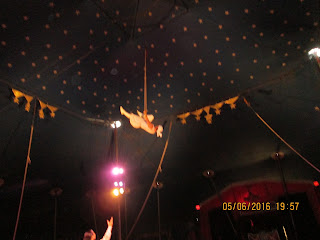 The acts on the trapeze and in the air were some of my favorites. I am amazed at the aerial feats that these performers do. 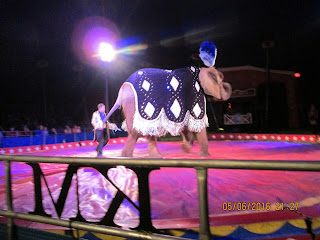 The dancing elephant was my granddaughters favorite. The elephant captivated her attention. She was surprised each time it passed her as if it was the first time she had ever seen it. 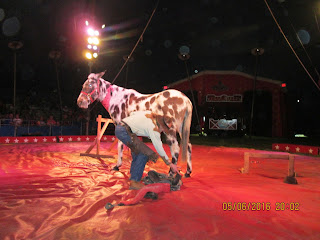 This old timer was sharing advice on how to train a mule. It was a funny aspect to the show. 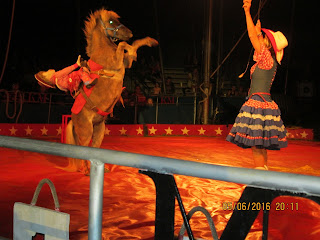 I felt this photo captured the standing ovation that this circus deserved. This lady had this miniature horse, some dogs, and a goat that she worked with and trained to do multiple stunts. It was a fun part of the show and provided lots of cheers and laughs. 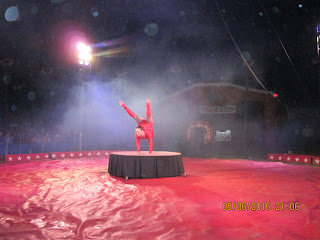 This gentleman was another amazing display of what stunts the human body is capable of with a little training. Multitalented and a wonderful addition to the show. 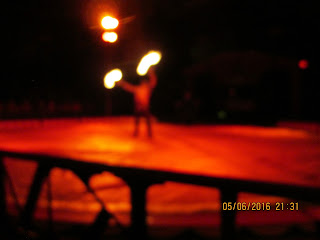 This was the final performance of the evening. I wish I had some better photos of this because it was one of my favorite parts of the entire evening. He was known as the human volcano and he done multiple amazing stunts with fire. A truly magnificent ending to the show. 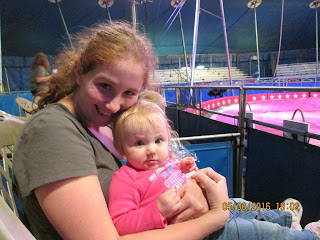 When I think of a farm house, I think of a two story home with a large front porch with a swing and a couple of rocking chairs on that porch. I imagine a huge jug of sweet tea on the porch as well. A welcome mat by the door and a warming invitation to all who enter it.

I live in the country and I live on a small hobby farm, but I certainly do not live in a farm house. We have a small home that really does not have a front porch at all. The deck out the back door could be considered a back porch, but I do not think that it is big enough to be a porch.

I also imagine a nicely cleaned and freshly painted kitchen with red in it as well as roosters and sunflowers as the décor. I do have the sunflower décor but I have mostly cow items in my kitchen and no red anywhere. I guess my kitchen does not fit the description either.

I have horse décor in my bathroom  and the floor is hardwood. I guess that makes up for the small house and the other things that should make it a country home. I hope it is enough. I will never have the farm house that I want and dream of, but I hope that I can make this one have a comfy, country feel. I am thinking of adding some gingham curtains- that should help.

What do you think of when you think of a farm house? We do have mason jars and milk bottles that we can drink from. 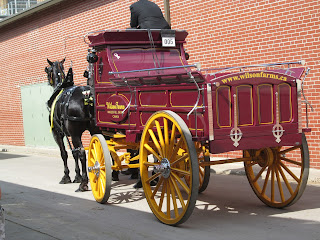 Internet thieves can be so disgusting! Internet thieves will sneak in and take things that are not theirs and they steal money from innocent people. They use their thievery to earn a living off of unsuspecting and naïve individuals. Last week, they attacked here. I was looking for some information on our YMCA and after attempting to download an application, I opened a file that I believed might be the form and suddenly I had a strange message that I was not sure what it was.

I actually did not really pay any attention as I thought I must have done something wrong, so I decided to look at some of pictures I had of ideas for birthday cakes for my grandbaby. Suddenly the same message was on my screen and NO pictures. This message said something about paying for my files to be retrieved or pray for a miracle. I suddenly realized that I had become a victim of ransomware!! Thieves had stolen all my files- pictures, documents, and music! Now my documents and my music was truly no big deal, but my pictures are a whole different story! I was mad!

I began to research this scam and found that it is one of the most dangerous virus' that is out right now. There is really not much of a way to recover your items and it is best to wipe things clean and start over. My only saving grace is that many of my pictures are still on my camera and not one single photo of my grandchild was lost! It did not help because I was still mad!

I decided that I would call our computer guy and he will clean it up, but he even said he did not think that he could get my files. I decided that this had to be a crime and that I was not sitting doing nothing. I contacted the FBI and I plan to contact the attorney general internet crimes division. I won't be held at ransom and do nothing. They messed with the wrong grandmother!

A dear friend of ours heard of our situation and since I sell for him online, he decided that I needed a new computer so I now have a really nice new system with Windows 10 and I am learning a whole new system. I am learning so it was take awhile, but I will be busy here now.

I hope all of you had a Happy Mothers Day! My husband done dishes for me after I cooked dinner yesterday. My daughters both bought me a nice gift and I got to spend my first Mothers Day with my adorable and beautiful grandchild! Smiles all around!
at May 09, 2016 No comments: