Ringling Bros. and Barnum Bailey Circus has been a household name for almost 50 years and now that is coming to an end. Ringling Bros and Barnum Bailey Circus has been called "The Greatest Show On Earth" will hold their last show on May 21,2107 in Uniondale, NY. Feld Enterprises CEO, Kenneth Feld announced that the circus has seen declining ticket sales for several years and following their decision to remove the elephants from the show, further decline has occurred. He stated that rising production costs and declining ticket sales has made the show an unprofitable show.

The circus was not a part of my childhood as my mother simply could not afford to take us. As an adult, I have been to the circus quite a few times and I must say that it is one of the most magical shows that I could ever imagine. Whether it be Ringling Bros. or a smaller scale circus, it is simply magical. I hope to take my grand doll each year to see a show. The animals, the performers, the lights and music make for a spectacular evening.

Since hearing this, I decided to look at shows they may have near me. The closest one is about 2 hours from home, but I am thinking that I may take my grand doll just to be able to see the show one time before it ends. There is a local circus show that will be here in the fall, but I would like to see the end of the road for such a well known show.

PETA, People for the Ethical Treatment of Animals, is happy to hear of the show closing as they do not feel animals should be used for entertainment. I respect their views, but I feel that Ringling Bros and other shows take great care of the animals and I feel that they need to focus on the treatment of many family pets instead of attempting to end shows like these. PETA would close all shows and zoos if they could. Animals are used in many shows where they are treated well. If you disagree, that is fine and you are certainly entitled to your opinion. I know many pets that are kept in cages or on chains, ropes, etc. and PETA would consider that wrong.

I love animals! I live on a hobby farm and I am a country girl at heart. I have had many pets in my life and I treat our animals as pets, However, I also know that animals are all wild to some extent and I respect that.

I won't talk more about that but I would like to close with a photo of the circus. 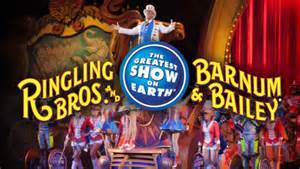 To all my Blogger friends here, I must first say how very sorry I am that I have not been here much and that my reading is so far behind, but I will visit your pages and I will read the words that you have written. My life has been crazy to say the least for the last week. More on that later and now onto the important things in life.

For anyone that lives in the Plains, Midwest and the Southern areas of the United States, PLEASE take heed to the weather warnings that are being issued by meteorologists all over the country. An Ice Storm looks to be headed into many parts of those areas of the country. Ice is one of the worst weather issues that I believe that we can have. It makes travel nearly impossible and it can cause power outages and other issues as trees and power lines become heavy from the weight of the ice. As I have been watching reports talking of this storm, I just pray that everyone uses common sense and stays in. It is nice that it is happening on a weekend as there won't be as many people traveling to and from work. Employers need to realize that human life is more important than that day of work. I believe that my daughter is going to stay home this weekend as I do not want her on the roads if we have ice. Here is a link to a video showing this storm.

Today is Friday the 13th and for many people that is a sign of bad things happening. I am not superstitious so I really don't think of it as a threat, but with the ice moving in, I guess we could say that it is due to the date. If you are one that worries about this day, I would recommend that you just relax and let the day go as it needs too. Maybe a good day to stay home and snuggle up with a blanket and cup of hot tea or coffee.

Life has been crazy here and I will share a little more about all of that tomorrow. I want to share another story with you all that literally, broke my heart as I heard of it today. As I was watching the news today, I heard of a story of an 8 year old girl that saved two of her younger brothers from a fire. She is truly a hero, but then the remainder of the story told that her mother had survived the fire as well but that 6 children lost their lives in the fire and dad was at work when the entire thing happened. The fire was in Baltimore and the family's name was Malone. Please, if you believe in the power of prayer, PRAY for the family. Here is the story. There is a go fund me page that you can find here and I ask that if you can afford a dollar that you please give to this family. I have cried since hearing this and it reminds me to love my family a little more each day. I do not know the family but my heart truly breaks for them.

That is all for now. I will be telling you all about my week at a later time.

Happy New Year! My wish for each of you this year is for plenty of good health and happiness. May God Bless Each of you in the New Year!

2016 took many celebrities and family and friends and I am ready for a new year to begin. My hope for my family is that we all prosper and are healthy in 2017. I plan to enjoy life more and to do many things on my bucket list as it might be called. Spending time teaching my grand is the most important thing that I can do and we spend many hours a week together doing that. For a 19 month old, she is very smart, I think!

My youngest daughter turned 20 years old this past week and so I now do not have any more teens around but I know that the grand will be soon enough. Why do they grow so fast? My other two are 26 and that seems nearly impossible. My step son and my daughter are only 3 months apart and so most of the time they were growing up, it was like having twins. They are very different personalities and my step son is more like me and my daughter is more like my husband. He has been her dad since she was 2, but she has always known her dad too.

How did you spend your New Years Eve? We had friends over and played cards well into the new year. I did not sleep much so I guess this will be a short post and I will attempt to rest a bit today but for now there are dishes to be done so I will see you all tomorrow.
at January 01, 2017 No comments: