Our weather has drastically changed in a week. Last weekend we were camping and this past weekend, we had snow flurries. Yesterday morning, as we were visiting our "adopted" set of parents, I walked out of the house to see a beautiful but not welcomed sight of snow flurries. Of course, I commented to my husband that it was time for snowmen and Christmas music.
I love both! Snowmen are almost an obsession at my house and I do love Christmas music. I actually have a CD ready for the car today. As I am driving to work, I will be listening to some Christmas songs. The weather is not fully cooperating for that today as it is supposed to be closer to 50 degrees today, but I can still feel warm and relaxed with my music.
I must make this short this morning as I have to get some things ready for the new satellite television that we are getting. It has been a long time without it and I must say that even if I missed it some, I had become quite content without it. My husband feels that we need it with winter coming and the longer times that it is dark. He says if not bedtime may be 7 or 8 p.m., which I would be fine with some days. Oh well! It's his indulgence. I will be reading or working on some of my craft things that I want to finish this year!

Take care and Happy Monday! I will try to be back later with some news and photos.

A new movement has quickly gained momentum following a tweet by Alyssa Milano's tweet with the hashtag MeToo. Social media has become the way to speak and have your voice heard and this is certainly the trend of the next few days until something new comes along.

#MeToo is a movement that has been created in social media for women to speak out against sexually harassment and sexual assault. Women are hoping that this brings to light for many just how common these problems truly are. The trend became increasingly more popular on Sunday following the reports that many women are speaking out against Harvey Weinstein, a well known movie producer.

Sexual harassment is widely accepted throughout many industries even in today's world. Women for years have known that you sometimes are expected to just keep quiet because the man has more power in the industry than you do and many women still believe that no one will believe them.  Following the accusations against Bill Crosby, another very well known person in television and film it seems that more women are feeling that they can speak up.

#MeToo has many women saying that they have been victims to this kind of injustice. They believe that this kind of campaign may aid in ending the injustices that have been widely accepted in many industries. The #MeToo campaign is not just for women suffering from sexual abuse or harassment but for those that suffer from physical abuse as well.

Many women feel that they can't say anything and in some cases they can't. If you have ever known someone that has been physically abused in a relationship, you are well aware of how afraid that person is to speak out even if they are away from the abuser. They are scared of the consequences because of the past that they have lived.

Abuse has happened for years and it is time that women and men speak out if they have been victims of this kind of abuse and simple abuse of power that someone has had over them. Human trafficking is one of the largest problems in the world today, but it seems that we do not hear about it daily like we do so many other issues that are not as heartbreaking. Sex trafficking needs to be stopped because no man or woman should have power over what we do with our own bodies. It simply must stop!!

Twitter is just a sounding board for this type of campaign . Let us take these movements and make something happen about the issue. Let's get the many other abusers off the throne that they believe they are on.
#AbuseIsReal
at October 17, 2017 No comments:

Drenched will be my description of how I will look today as it is raining hard here and supposed to rain all day, while I will be working my courier position today and will be in and out all day in it. It makes for a miserable day!!

Accepting this job at the library was a good idea as I have had to purchase a new car and will have extra payments now, but it seems as though the weather simply will not cooperate. I have either had really hot days or rainy days. Rain makes the job very stressing as I hate wet clothes and I hate being in the rain!

I am well aware that we need the rain as it has been a very dry summer. I am well aware that the rain is good for the environment but I just am not a fan of the wet work that I will be doing. The books will be getting wet and I will be wet. The van will be more difficult to drive and the day will seem to take much longer. It will be a good 4 hours in and out of the rain working. I will probably not do part of the job today as I normally load up books that are donated at the different branches for the library sale, but that is usually a lot of work and I probably will not do today. I will do what must be done and leave the rest I think .

Well, I need to figure out what I will take to drink today. Enjoy your day where you are. I will share more about my grand doll's surgery tomorrow but she is feeling better now.

For some reason the rain today reminded me of this photo of a cloudy day that we had while traveling once and the large number of birds that we seen flying around a tree. This tree was loaded with thousands of birds and once they began flying, it was a sight to see. Remember the movie, "The Birds", that was my first thought. 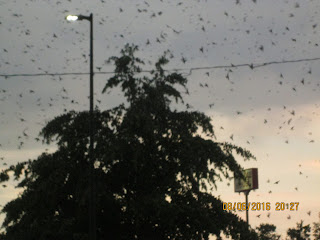 Gun Fire Erupts While Jason Aldean is on Stage

Gunfire erupted while Jason Aldean was on stage at the Route 91 Festival in Las Vegas on Sunday. Early reports are that at least 50 have been killed and more than 200 have been injured. The gunman has been killed and a woman of interest has been found. Reports are still sketchy at the moment due to the investigation still being very new, but reports are saying that it is the deadliest mass shooting in the United States at this time.

It is believed that this man acted alone and is not linked to any military or terrorist group. Police were asking that a woman be located that they were saying was a person of interest, so I believe that she may have been involved. The reports are not saying that though. They were also looking for two vehicles that they believed belonged to the shooter. The gunman has been identified as Stephen Paddock, who I believe was in his mid 60's.

Witnesses say that the gunfire began about 10 p.m. as the gunman fired from the 32nd floor of a hotel  near where the concert was being held. CNN is reporting that none of the performers were injured during the mass chaos. I believe that many will be effected by this shooting though. Aldean has made a comment on Instagram.

Prayers for all of those involved as the story continues to unfold. Prayers for the survivors that will feel many emotions over the next few days. Prayers for all families involved including those of the gunman. Hopefully, a motive can be discovered to give a little more insight into what caused this man to snap and attack innocent lives.

#prayersforVegas
#stopthehate
at October 02, 2017 No comments: