Good Afternoon! I am at my daughters' house and doing ok with post op now. The first few days were rough to say anything. Surgery was scheduled for 2 to 2.5 hours and it took over 4 hours, Once the surgeon got into the work, he realized that changes to what he was doing needed to be done so I was in surgery much longer than expected.

The morning of surgery I was so nervous and wanted to cancel it, but I trusted God in going through it as scheduled. Upon arrival at the surgery center, the receptionist was behind and it was only 7:45 a.m.  She finally called us up and explained that she was behind because there were so many papers to handle and that there weren't so many three years ago when she retired. The hospital was recently hit with a hacker that took hostage all of the records, so now things are having to be done manually instead of relying on technology,  We finally was escorted back to my preop room and things continued to go downhill. The lady that was attempting to place the IV in could not keep the vein from collapsing and after 4 tries, she finally got someone else in the room to try and my husband made it clear that he had one chance. Thankfully, he got it without any problems. About the time that the IV is going in, I hear the nurse telling a patient that they have to cancel the surgery because the patient has tested positive for COVID. Great, I wonder how many of my nurses have been in contact with her and I. I have been vaccinated due to my home health work, but still, I don't need exposed to it at the surgery center.

Surgery finally got started over an hour later than they had told me and then off to sleep I went. I was under anesthesia for so long that I was drowsy and groggy for several days. Plus, my mouth was very dry and my throat was sore. I barely remember much of the post op in the hospital, I remember I was in pain well before leaving the hospital. I was nauseous when I would move and had a 2 hour drive home. I remember being sick in the car and being in pain. Once to my daughters' , she tried to feed me but I was instantly sick so pain meds were administered and I went to bed.

The pain was almost unbearable and I was simply miserable on Thursday. My daughter made a call to the doctor who recommended that we remove the splint and replace it with my walking boot from the other foot. Of course, I hadn't brought it from home and so my husband had to meet my daughter that evening and get it to us. Once we got it, we knew it would not work. My foot was bandaged to large to fit in the boot. Another call into the doctor on Friday and it was recommended that we take off the soft wrap till we got to the Ace bandage and then put  into boot. We tried but with only three or four layers of wrap left we had not found an Ace bandage. Absolutely , did not want to go back into the splint, but it is needed.

Thursday thru Saturday is a blur and I don't remember much at all. The nausea was gone but I had no appetite, which is still a problem. I am still struggling with being groggy and now I am constipated from the pain medicines. Thankfully, my first post op is Thursday. This recovery has certainly been rough.

I will give another update soon. 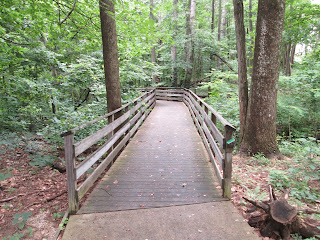 Until we meet again, may your trail be clear and may your ride be smooth.