Well, another week has come and gone on the hobby farm I call home and it has been quite an uneventful one, but lots of fun and now it's hot! Record shattering HOT because the humidity is becoming oppressive, which makes being outside almost impossible!

First of all, I want to say Happy Father's Day to all the dads out there! My dad died several years ago and we were not close at all. I still think of him often and I am hoping to visit his grave soon. He was not a fun dad and life was at times horrid with him. In his later years, he mellowed some and he had a great relationship with my youngest daughter, which I am thankful for. It was too late for us to have a great bond though because some wounds never heal! I am thankful that my daughters have a dad that they can depend on.

Yesterday, I was able to go to a garage sale, which I love to do but rarely find time. I hit the jackpot too!! I purchased a set of three Paula Deen pans with lids for $5.They are red with gold trim and absolutely beautiful. I bought a few other things too, but those are the deal of the day as they will be going in my new camper, which I hope is home this week.

Yesterday was hay day. Why is it always the hottest day of the year? I just assume that someone doesn't think that out well. Luckily, my husband always gets help and I never have to be the one to do it. I have thrown some hay in my day and it is not a fun job. It is work!! It is hot work even when the weather cooperates!

Thursday, we spent time clearing weeds from the garden. It's a small garden but I swear the weeds take over so quickly. I hate to see the time my daughter's boyfriend will spend weed eating this week. He does it usually and my husband mows. It works out great but with three houses and yards and over 30 acres to take care of, it can be a chore. 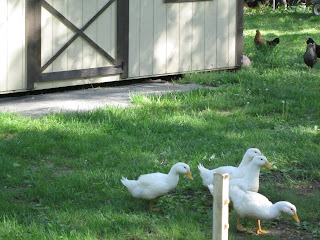 These are three sweet ducks that now are kept in a large dog kennel to keep them from being prey to what has now killed our beautiful turkey and an entire nest of eggs that we were waiting to hatch.  Most likely a coon that done that and a coyote that killed the turkey, but you never know here.

In the grand doll's world this week, we have learned the letters A and H. We have also learned Hickory, Dickory, Doc. She seen the doctor this week and we were advised to give her children' Ibuprofen for her legs as she complains that they hurt after she has played awhile. She had grandma in her pool this week and that was fun, but we were both a little sunburnt.