Saturday 9: "Alfred Hitchcock Presents" Theme This week's song was chosen because this is the last Saturday 9 before Halloween. Are you unfamiliar with this week's tune? Hear it here. 1) The Master of Suspense, Alfred Hitchcock, was born in England. Name another pop culture contribution England has made. A. Elton John. 2) This week's song is recognized as the theme to Hitchcock's long-running TV show, but "Funeral March for a Marionnette" is a classic piece written for piano in the late 1870s by Charles Gounod. Do you often listen to classical music? A. I will occasionally listen to classical music when I am home alone.  3) Janet Leigh's shower scene in  Hitchcock's Psycho is considered one of the scariest sequences ever filmed. What's the most frightening movie you've ever seen? A. I don't like scary movies. I remember watching a show once with my grandma about a lady that owned a doll shop and the dolls would come to life and they killed her. I had nightmares about dolls killing me for a long time and I still remember the dream today. I don't watch scary movies, but I did watch Pet Cemetary once with my husband. YUCK!!

4) Hitchcock admitted that he "never trusted birds," and he took that fear and turned it into the movie, The Birds. Is there a member of the animal kingdom that just gives you "the creeps?"

A. Mice and snakes 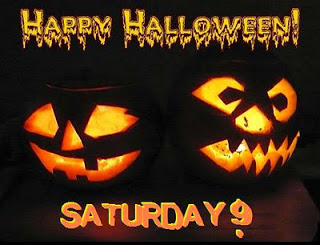 5) Halloween will soon be upon us. Will you carve a jack o'lantern this year?

A. Not really. I will watch my husband and grand doll, but I won't carve one.

6) What candy will trick or treaters get at your house?

A. We live in the country so we never have trick or treaters. I always buy the neighbor girl a Hershey bar as that is the only candy she eats.

7)  When you went trick or treating, did you prefer fantasy costumes (like a storybook character) or scary ones (like a monster)?

A. We usually done things that my mom or grandma had laying around. I loved being a hobo!
8) Which candy was your favorite? Which one were you disappointed to find in your trick or treat bag?

A. I love chocolate! I hate suckers!!!

9) Which do you find scarier -- cemeteries or haunted houses?
A. Haunted houses. I love cemeteries!!! _____________ I encourage you to visit other participants in Saturday 9 posts and leave a comment. Because there are no rules, it is your choice. Saturday 9 players hate rules. We love memes, however.