Halloween truly is not one of my favorite holidays. I don't like being scared and I do not like haunted houses, zombies, blood and gore, etc. It just is not my idea of a good time, but I do like the fall aspect of it and some of the creativity that goes along with the costumes and fun times that are to be had this time of the year.

Last night my grand doll had a Halloween party at the studio where she takes gymnastics. She was going as a witch but she would not wear the hat that was part of the costume. ( I can't be mad as I hate hats as well.) My daughter had not bought anything to decorate the car with as it was a trunk and treat as well, so off to town we had to go. We need the preparations for the graveyard taco dip that we were making and we had to buy decorations. While there, I decided that I wanted to dress up as well. I dressed as a witch as well. Only my outfit was a little different than hers, as I decided to go with a black outfit and green face while her outfit was black and purple and very pretty.

Here was the end result to my costume. 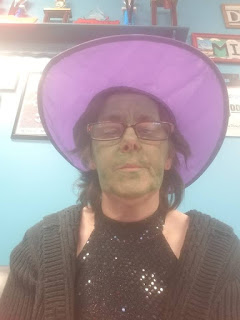 We were outside some so I had to have the sweater, but the dress was a very nice sequined dress that country superstar, George Jones, purchased for a friend of ours that worked for him many years ago. It was beautiful! The hat I have one was actually my grand dolls as she wanted the one I had because it had purple hair with it.

The party was a huge success! There were plenty of Halloween inspired foods such as ghost poop, (which was grapes covered in powdered sugar), graveyard dip, mummy pizza sticks, mummy pretzel sticks, and many others. Some parents have such talent when it comes to this type of food. Also, there were games, music, dancing and lots of kids playing and having fun!

The decorations from the car will go on my porch or in my house today and I will enjoy them till the end of the month. I am thinking that I may bring our elf of the shelf out of hiding soon. We have so much fun with him and the grand doll could use some extra Santa patrol. LOL!

Well, I believe that I should get my day going and do some cleaning again. I began going through some old photos last night and I plan to do some more later today. First, I have animals to feed and some cleaning to do as well as some laundry. I plan to head to church later to celebrate the baptism of the son of one of my longest and dearest friends.