Most of my readers are aware that my husband and I recently took a vacation that he had purchased for me as a Christmas gift. He traveled quite often for several years while he was working as a mill wright and he is not fond of it, but I thoroughly enjoy it. He needed the time away from his shop though too.

We traveled to Branson, Missouri and drove into Arkansas just because I had never been to that state and I hope to mark most of them off the map by the time I leave this old world. Anyway, while we were traveling, I took many pictures and looking through them yesterday with the grand doll, I realized that I had a few that were a little interesting and I would share them today with you. 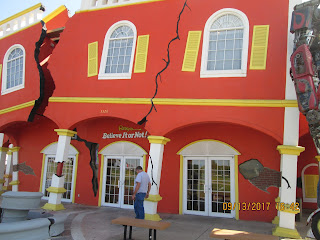 This is taken in front of the Ripley's Believe It or Not museum in Branson. The building looks as though it has been through Hurricane Harvey and Maria and the earthquake that just hit Mexico. Believe me, when I say looks are deceiving both inside and out at this particular place. If you have never visited one of these museums, you should. They are interesting! Mr. Ripley was quite an interesting fellow himself, I believe. 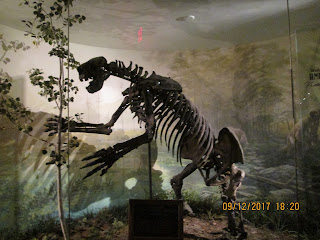 The grand doll , for some reason, has taken an interest in dinosaurs. This particular set of bones was located in a very interesting natural history museum. If you visit Branson, you need to go to Top of the Rock Natural History Museum.  It is located within the Big Cedar resort, but is open to the public. It is a unique look into some of our early history and very informative. I believe the cost to get in was $12 per person and it was well worth that price. It would be easy to spend 3 or more hours in the museum itself, plus the views from the top of the rock are amazing. 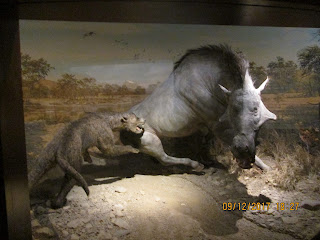 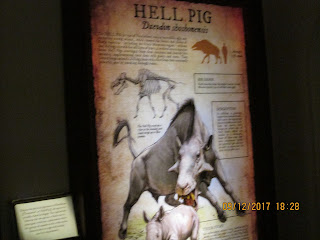 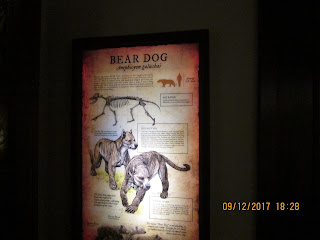 Another interesting site in Branson is the rather large rooster that is part of the front of a building. I knew the grand doll would like it so I had to capture the photo of it. 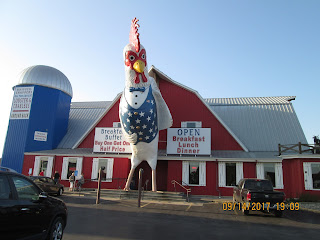 As you can see this is some sort of restaurant but I don't remember the name of it. My husband was actually looking at an all you can eat crab and lobster place behind this called Whipper Snappers. We did not eat there as it was a little expensive for this trip. I am not a seafood fan, but I would have gone and either ordered something else or just had my tea and enjoyed the company.

Finally, the last photo for today is this human blood carrier that was used by the military, I assume. We found this sitting on the porch of a rather small, unique gift shop just inside Arkansas. I thought of buying it to make a coffee table out of in the living room. I thought with a small red cover on the top of it, it would be quite the centerpiece in the room and make for plenty of conversation with guests. No one else thought that my idea was a good one. Oh well!! 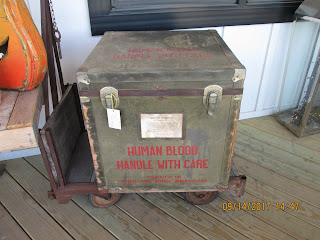 Well, I must move on for today. Thanks for traveling with me today to some of the odd and unusual sights that we were privileged to see while we were gone. I hope you enjoyed them as much as I did. Until next time, safe travels.