My heart is simply breaking as I write this post. The tears have been shed multiple times over the last week as I have heard more and more about the story of two young girls that had their lives taken way too soon by a monster! I am writing this to share the story of how precious our children are and how fast they can be gone, plus I want to share the photo of the main suspect because police are saying that he could be anywhere. 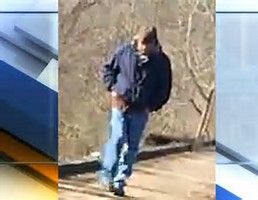 If you happen to have seen this man or know who he is PLEASE contact the Carroll County Indiana police at 765-564-2413. He is considered the prime suspect in the killing of two 13 year old girls that were hiking a popular walking trail last Monday. 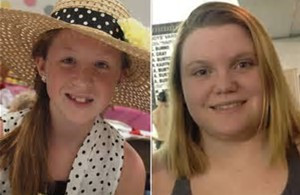 Abby Williams and Liberty "Libby" German were dropped off on a popular walking trail in Delphi, Indiana last Monday to enjoy an unseasonably warm Feb. day that they were out of school. They were to meet their ride later that afternoon but never arrived at that destination. The last known photo of them was taken on the Monon High Bridge in a Snapchat photo that Libby posted. It shows Abby walking on the bridge and many are saying a man is seen hiding behind a tree in that photo. Is it possible that he was just waiting for the perfect victim or victims in this case?

The girls had cell phones with them and I am sure that being from a small town they felt that they were safe being together and as far as I am concerned they done everything right - Had a buddy system and had a phone, walking the trail in the middle of the day in broad daylight. What more could they have done to protect themselves? Carry mace? Carry a knife or other kind of weapon? What kind of life would that be for children?

Police are not releasing many details in their deaths or of their disappearance, but they have now said that this man in wanted as the main suspect. He is seen on a trail cam in the same area as the girls in a close proximity of time.

These two young ladies did not deserve to die! The monster that terrorized them and killed them needs to be behind bars and taken off the streets to protect other children that might cross his path.
PLEASE HELP THE FAMILY AND IDENTIFY HIM IF YOU CAN!